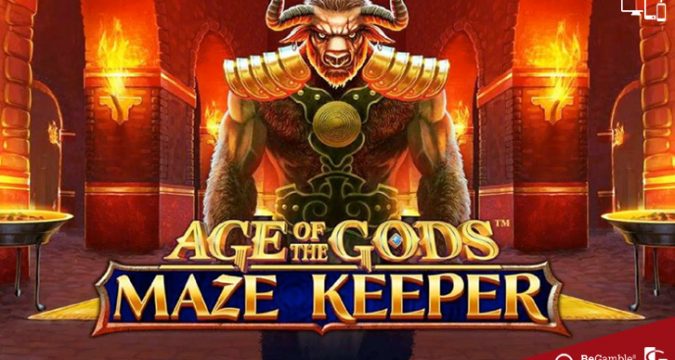 The Age of the Gods: Maze Keeper Review

It is a 6×4 reels slot and 4096 win ways; however, it has the exciting Ways Boost feature that wow players during the Free Spins, allowing up to 14400 ways to win some terrific Moolah.

Playtech’s new release is based on Minotaur, also known as the keeper of the Maze. He was a monster with the body of a man and the head and tail of a bull. According to Ancient Greek Mythology, Minotaur received annual offerings of youths and maidens to eat; however, in this new release, he is more giving. Maze Keeper shares the Progressive jackpot with other Age of the God slots in the series, and there are a total of four progressive jackpots, the largest being the Ultimate Power Jackpot.

When released, play this slot for free and real money, and see what offerings this caged monster brings you from the Labyrinth.

Age of the Gods Maze Keeper has a betting range starting at $0.10, reaching a max of $50. Playtech has not released the game s RTP yet, but we will update any new information as it becomes available.

Playtech has always paid attention to detail, and the symbols in the Maze Keeper are in line with the game’s theme. The main character is Minotaur, alongside various other mythological females and males. Other signs include Helmets, Game logos, Axes, and the low-value Royals 9 to A.

Playtech has kept a few surprises hidden until the game’s release. Here are what we do know about Age of the Gods: Maze Keeper features:

Played on 6×4 reels with 4096 ways to win.
During the Free Spins, the Wayboost feature can increase your ways to win to 14400.
Other Bonus features include Multipliers, Wilds and Scatter symbols
It has four Progressive Jackpots, the Power, Extra Power, Super Power and the Ultimate Power Jackpots

We await the reviews of this new instalment in the Age of the Gods series with bated breath, and this one looks to channel the myth about the Labyrinth whilst offering some huge wins.