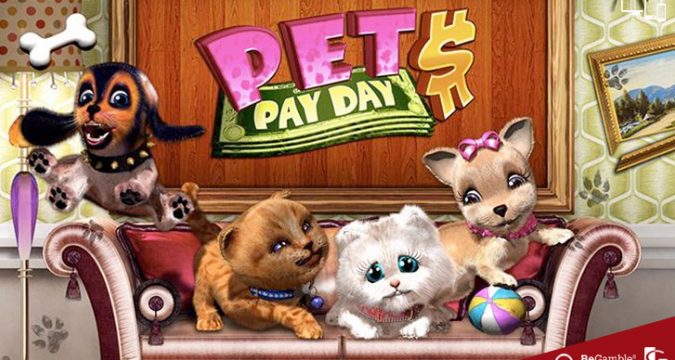 Pets Pay Day slot was initially released in 2013 as a Flash game. In the revamped version released in June 2021, Revolver Gaming has ensured this slot game has kept its original charm while reigniting the title in a modern version to include an improved math model for an even more exhilarating gaming experience.

The new version of Pets Pay Day comes with beautifully crafted symbols and animations with generous pays. It’s the first slot game to have fully animated 3D symbol characters that pop out and interact with the reels for that genuine Wow factor.

Spin the reels of this 5×3 reels and 20 paylines slots with a maximum win of 3000x the stake in this low to medium variance slot with an RTP of 96.10%

The theme and imagery are genuinely evocative of entering a pet salon. There is an adornment of cushions on a sofa and rambunctious pets on either side of the game. The symbols are various cats and dogs and standard pet fare, including bowls of food, collars, and pet toys.

The White Kitten is the game’s Scatter Symbol, and two Kittens trigger the Free Spins feature.

Enter the Pet Disco when you land three Kitty Scatters while Fudge the tabby and Chichi the Chihuahua boogie to the beat of the music. The cute and mischievous Fluffy dives for the curtains and hangs on creating a Stacked Wild that sticks during the Free Spins, allowing players the chance to rake in some big potential wins.

Three Bonus Symbols trigger the Backyard Bonus where Max, the curious puppy, digs for treasure. He can sniff out treasure, and when he does, players get to win up to 25 Free Spins with 5x Multipliers.

Pets Pay Day is the re-release and new, improved version of the old favourite from Revolver Gaming in 2013. The new version has maintained its adorable characters and charm, overhauling maths and gameplay for modern players. The slot has also been re-coded for cross-platform play and offers a maximum win of 3000x the stake. It is a slot made for slot players who enjoy extended playtime with more frequent wins.