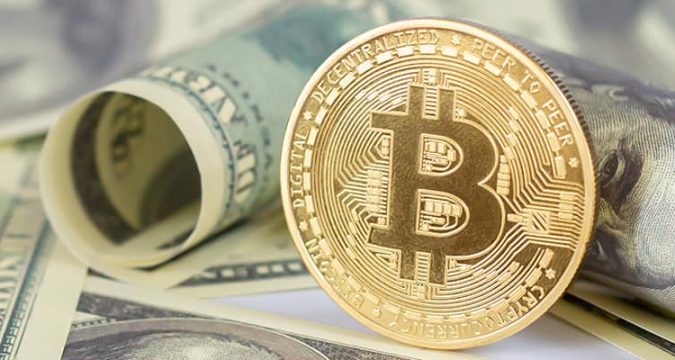 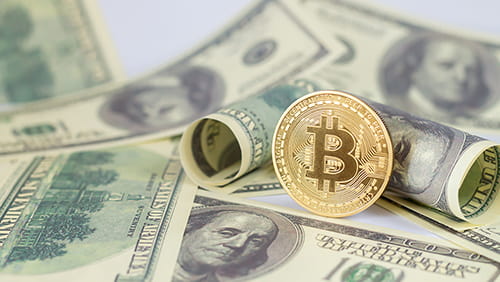 It’s happening. The monetary insanity that the world’s central banks have sunk us all into is turning into a wholesale monster. Corporations are actually considering replacing some of the dollars on their balance sheets with a useless digital token called BTC, as a “value preservation” tool.

Uhh…sure. Replacing fiat dollars with BTC for “value preservation” is like speedballing heroin and cocaine as a valuable tool for maintaining emotional balance. Yeah, you’ll be balanced, on average I guess, except you won’t feel that way ever when you’re swinging between wild extremes and your pulse varies from 40 – 200bpm every other minute and you end up in cardiac arrest. But hey, I know, the world has gone completely and utterly mad, so what else is new?

Just the rumors of this had spurred BTC past $58,000 a token, but then whoops, it crashed again by about $10,000 in a matter of minutes. This is what corporate America wants to put on its balance sheets? A pseudo-asset that they won’t even know the value of any given minute? Speedballing by comparison seems quite the mild, conservative habit to engage in. But the BTC crowd certainly has one thing absolutely right. Having extra fiat money on your balance sheet, especially U.S. dollars, at this point in monetary history, is extremely dangerous, even suicidal. Corporations are going to have to get rid of them real soon, because the U.S. dollar is about to completely implode. And with the U.S. dollar, will go every single other fiat currency in the world in real purchasing power terms.

Once it becomes obvious, it will be too late to do anything about it. It doesn’t matter how great a company you have. If you are interested in preserving your company, there is only one thing you can do. Replace any extra fiat currency stuck on your balance sheet with real money, with gold, now, or you will sink together with all the inflated paper nothing units on your balance sheets.

I concede, CEOs know much more about business than I do. That’s why they are business leaders and I am not, nor will I ever be. So who the hell am I then? I will say confidently, I absolutely know my place in this world. It is as clear to me as the sun. I may not understand much about doing business, but I know what money is, and I know what money is not. I know what happens to unbacked paper currency when governments shut down the world and blast currency from monetary firehoses all over the world until we are all drowning in it. It dies.

Are you listening, Oh you gaming industry execs? If you’re a CEO reading this, or a CFO, and you’re struggling with shut down casinos and mounting debt, I’m talking to you. You have only a few months at most to protect your companies from a hyperinflationary nuclear bomb that is about to go off and destroy everything in its path. The fuse is being lit as I write this. I will now describe the fuse.

About 18 months ago I wrote this weird, esoteric, wacky article. I made the case that once U.S. dollar interest rates went negative, all commodities would warp into backwardation. Meaning, the spot prices for all commodities would become more expensive than their futures price. This is now happening. Almost all commodities are now in persistent backwardation. All grains, sugar, lumber, and cotton; energy including natural gas and both Brent and WTI crude oil; base metals including copper, tin, and iron ore. They are all in backwardation now, and some have been that way for months now. The CRB commodities index is now climbing at its fastest pace ever, doubling since March. 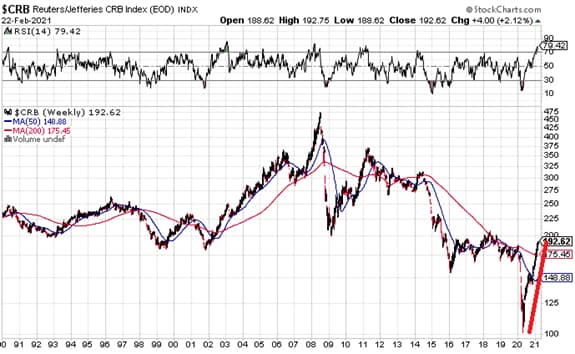 And this is with various forms of lockdowns persisting in Europe and the U.S., which should mute industrial demand for commodities. Paper currencies are dying. That’s what’s happening, pure and simple. And they are about to get their death blow.

What death blow exactly? Short term nominal U.S. dollar interest rates will be negative within precisely 4 weeks.This is because Janet Yellen, now Secretary of the Debt, has now begun the process of dumping $929 billion directly into the U.S. banking system by the end of March. This is in addition to the $1.9 trillion “stimulus” bill and $1,400 checks to every American about to get through in a matter of weeks.

This process of dumping nearly $1 trillion into the U.S. banking system has already begun. How is it going to work? There is currently a $1.5 trillion short term bill hamster wheel that the U.S. Treasury has been running on like a crazed mouse since April. They issue about $1.5 trillion in short term paper every month and pay it back with about the same in new short term issuance. They have about $1.6 trillion stuck in their bank account at the Federal Reserve, and that money is now coming out to pay down that hamster wheel. The issuance of new short term paper is slowing down. All this new money is going to stuff banks so full of short term cash that they will be forced to slam it into the existing supply of short term paper to such an extent that the rates are going to go negative, nominally. Nobody knows how deeply, but it’s definitely coming, probably in the next few days.

Below is the graph of 1-month rates from CNBC. They are about to cross the zero boundary.

When that happens, commodities prices are going to get completely unhinged. The cash on corporate balance sheets is going to start losing purchasing power very fast. And that will only encourage more dumping of it, and increase the positive feedback loop now already in place.

They can dump it for BTC, sure. But that’s not going to help at all. Why not? Because the value of BTC depends entirely on the U.S. dollar still being usable in a basic sense as a currency. If the dollar falls, so does BTC, because BTC is not fundamentally useful other than as a way of transferring dollars or other fiat currencies. If there is no value to transfer, there is no value to the transfer tool. Corporates are going to have to dump extra paper currency for gold, quickly, yesterday, or they are going to lose everything. Same for individuals. Time is almost out now, I’m sorry to say. Good luck out there, and if you want a guide during these crazy times of monetary chaos, follow me on SeekingAlpha, and sign up for a free trial at The End Game Investor.